Insurgency Kit for Farmers Who've Had Enough of Monsanto
2010
Mason jar, my own organic soybeans, moxy
1 quart jar
Deceptively simple in appearance, this piece contrasts sharply with the complexity of seed rights in the world today. Seed patent laws now prevent most traditional farmers from practicing the time-honored tradition of seed-saving. Seed-saving allows the farmer to select the best of the year's crops and save seed to plant for the following year and into perpetuity. Monsanto--the chemical corporation responsible for DDT, agent orange, rBGH, Round-Up herbicide and most-recently, the insidious worldwide takeover of farming practice--actively seeks out and prosecutes farmers who are caught saving seed that contains their patented traits. These traits are in >93% of all the soybean seed planted in the US. The rapid spread of genetically-modified organism (GMO) seeds and seed patent laws are locking farmers world-wide in a kind of indentured servitude. 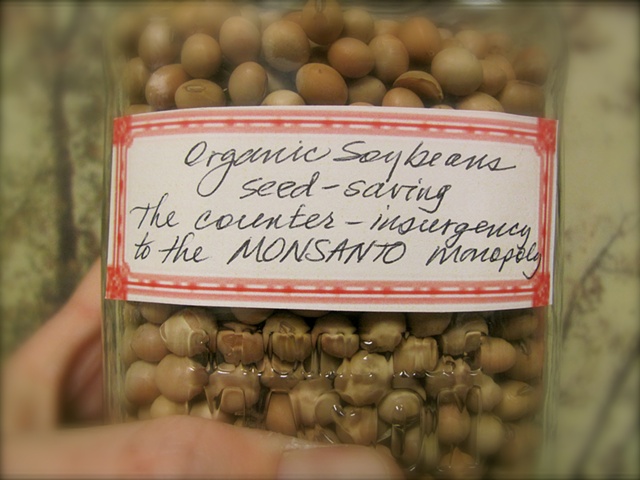